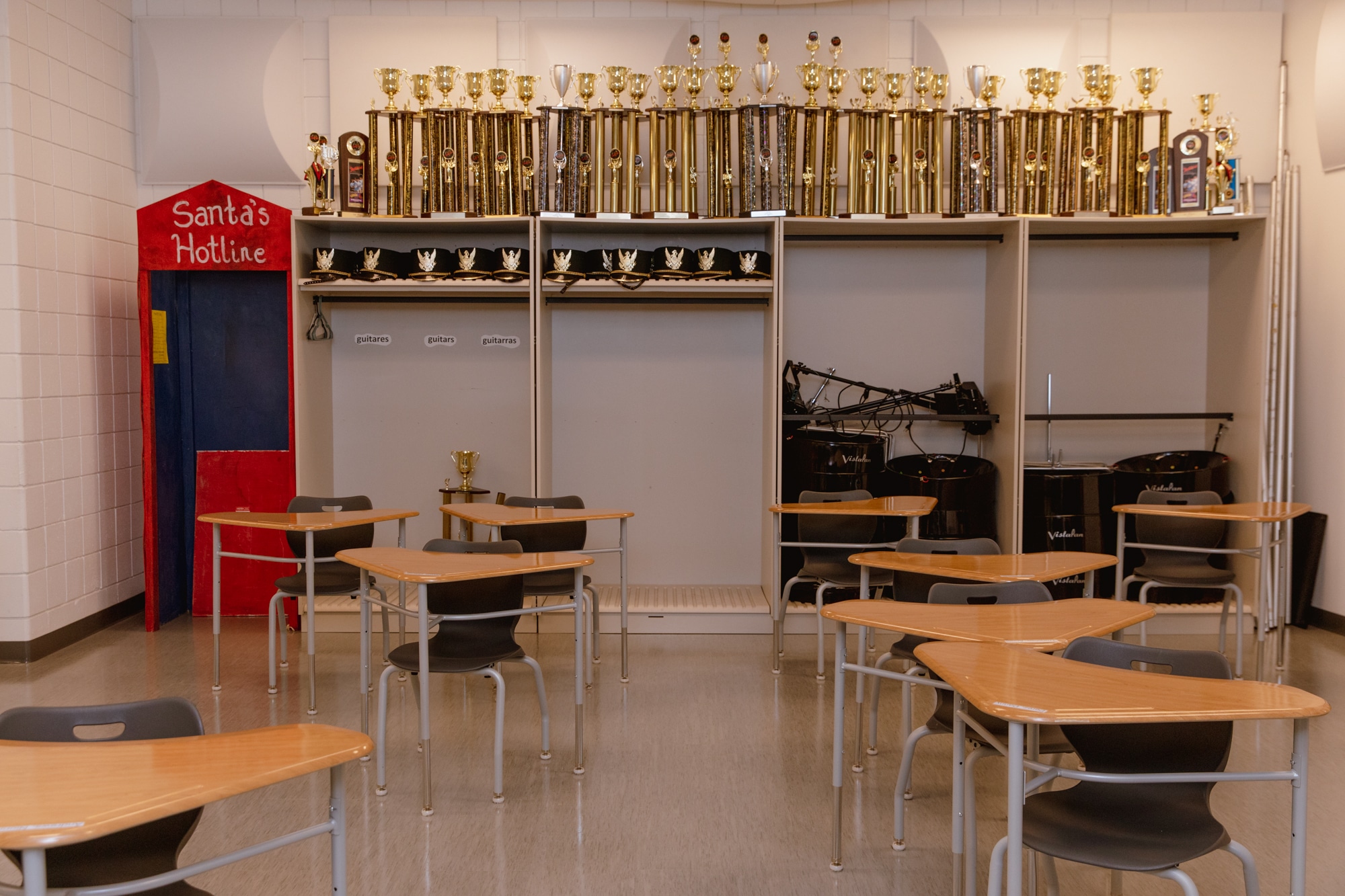 A room that used to be a music room at Harding High School has been switched to a regular classroom because more rooms were needed as students attend class in a smaller size.

Harding High School Music Teacher Sheena Graham expects a lot to be different when all of her students come back full-time as the COVID pandemic wanes.

Harding and other schools in Bridgeport are going to need more staff to help teachers get students caught up — as well as school counselors, she said.

“It’s having all the social-emotional skills, and having additional people in that area, because coming back is going to be challenging, depending on how your family has suffered through the pandemic,” she said. “We may need more counselors on hand to deal with all of the needs, even for the adults.”

School districts across the state, especially those in Connecticut’s cities, expect they will need huge increases in staffing to get students caught up after the COVID pandemic broadly interrupted learning. Gov. Ned Lamont has proposed sending schools more than $440 million in federal aid — but, at the same time, pausing promised increases in state aid.

Even though the federal funding is a bigger increase than districts would have seen if state aid had been increased, many districts say the plan will leave them short. Their needs, they say, far exceed what the federal money can provide — and after two years, when the federal funds dry up, they’ll be back to where they started from, underfunded and struggling to give students the support they need.

For example, Bridgeport is receiving $40.5 million in federal funds to spend over the next two years, but Superintendent Michael Testani said that with the “masses of kids” that could potentially take advantage of learning loss recovery and summer programs, that is not going to be enough. The district could go through the money quickly this summer and the next.

“We obviously can’t add additional employees, because we know in two years that money’s going to dry up, and those people and those services would be gone,” Testani said.

“It would be nice to be able to have a little flexibility, possibly to either stretch the money out or to know that when this money is gone, that new money would be coming in.” 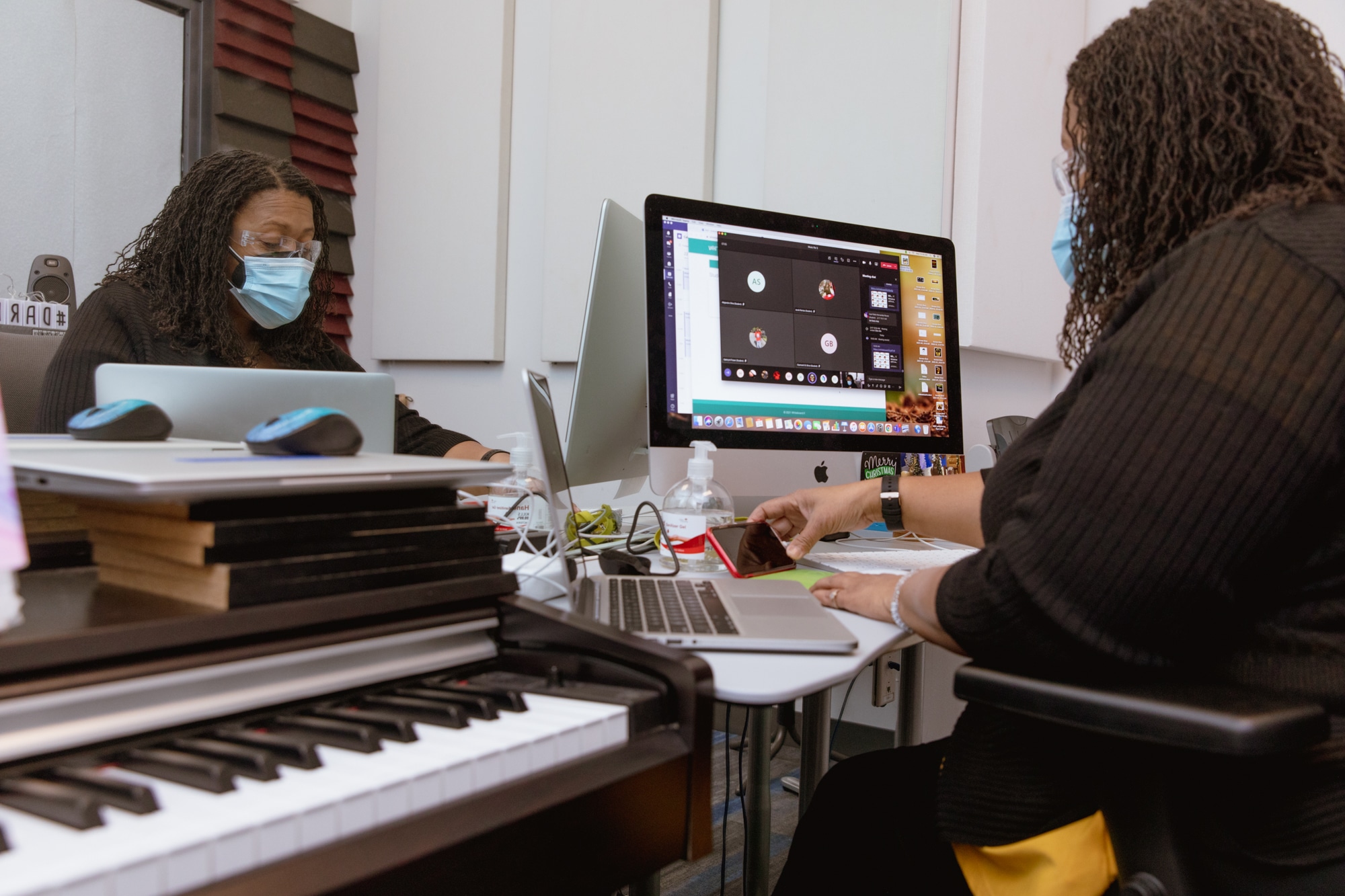 Sheena Graham sets up her gear during her music class. As of Feb. 25, students join classes remotely on Wednesdays.

Lamont’s budget proposal pauses the state’s school-funding formula by skipping the $117 million increase in state aid that was scheduled over the next two fiscal years. Stalling the increases in the ECS grants will help Lamont close the state’s deficit, which tops $2 billion over the next two fiscal years. The proposal does nothing to satisfy the growing chorus of those who want the state to fully fund seven years’ worth of Education Cost Sharing grant increases by fiscal year 2022, or those who just wanted the state to increase annual funding.

Instead of increasing state aid, Lamont is relying on the $443.2 million the state was required to funnel directly to districts to meet their needs. Districts were told on Feb. 1 how much they will receive over the next two school years.

The state Department of Education released guidance and priorities for how federal relief funding should be used, which includes paying for staff development and protective equipment to keep schools safe during the pandemic as well as to provide extended days, more tutoring and summer school for those who have fallen behind during the pandemic.

“Gov. Lamont’s proposed budget leverages over $440 million in federal funding that is available to school districts across Connecticut including the state’s Alliance and Urban districts,” the governor’s spokesperson Max Reiss said in an email. “These funds can and should be used for school leaders to provide the resources necessary to address the needs of the districts and focus on learning loss and recovery as well as continued safe reopening. Districts were also held harmless from ECS reductions, protecting them from the impact of COVID related enrollment fluctuations.”

But for a district like Bridgeport, schools have struggled for years with the ever-increasing cost of operation. The district has shed 24 school counseling staff and social workers since the 2010-2011 school year.

Bridgeport spends just $15,000 per student, compared to $19,000 spent per student in neighboring Fairfield.

“Bridgeport has been the most underfunded when you look at it, compared to New Haven and Hartford and Waterbury,” Testani said. “So we’ve lost a lot of critical services to kids over the last decade, and I think it just makes it much more challenging. People are taking on more and more and more.” 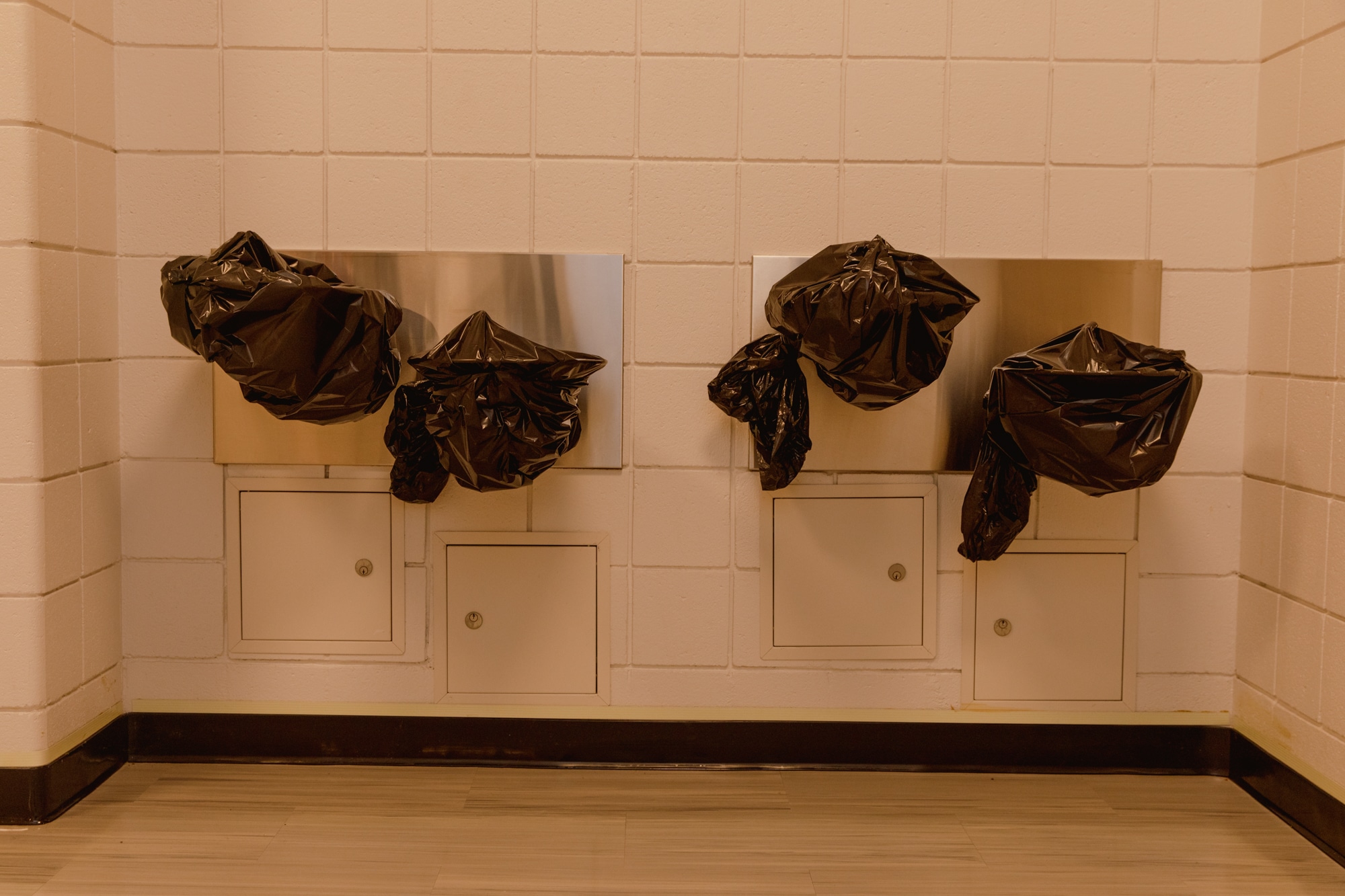 Water fountains are not available during the pandemic at Harding High School.

If districts received the full increases in Education Cost Sharing funds now, Bridgeport would have received an additional $15 million on top of $20.28 million in federal relief heading to the district this year.

With that extra money, Testani said he would’ve been able to hire more staff.

He would hire kindergarten paraprofessionals to help with early education experiences. He would hire more social workers and school counselors to help relieve the high caseloads. And he would hire people for the district’s department of instruction to get help on curriculum and professional development.

Some of these positions and services were in place but lost due to a lack of funding even before COVID shut schools down, but the pandemic has since shed a light on how critical these services are to the city, Testani said.

“The situation here in Bridgeport prior to the pandemic was not ideal,” Testani said. “Coming out of the pandemic, it’s even more amplified, to the point where we need to hit the ground running immediately to be able to provide students with support and services. And we need funds to be able to sustain that — not just for a year or two, but long term.”

Other districts see the same problems

Other district leaders have expressed the same concerns as Testani, saying the federal relief funding is not enough for them to address the needs exacerbated by the pandemic.

In New Haven, the district’s chief financial officer told board members on Monday that the governor’s proposal to freeze the ECS funding will have a “devastating” impact on the district, according to the New Haven Independent.

Hartford Superintendent Leslie Torres-Rodriguez explained that if the school year, or school days, are extended to help address learning loss, it could cost more money than the district is getting.

“I’m not saying that that’s going to be the approach, but I have to start somewhere, so that we can know what exactly are we looking at from a resource perspective, because of sustainability,” she said, adding that teachers have told her that they need additional time to support students.

“We know that this is not a one-year, one-shot recovery and rebuilding effort. This is a multi-year approach, and that’s just as it relates to the instructional support.”

A letter penned to Lamont Monday, signed by superintendents from the state’s urban and Alliance Districts, called for him to reevaluate his budget proposal so that additional state aid will head to districts and warned about significant disruptions to their budgets.

“The proposal to use one-time federal ESSER II dollars to address a state funding obligation creates a future onerous structural deficit for state and local budgets,” superintendents said in the letter. “By ‘pausing’ the ECS increase formula and supplanting this phase in approach with funds not intended for general budget activities, Connecticut adopts a financial strategy that will create large scale disruptions for fiscal year 2024.”

That “disruption,” the letter said, could result in over a $109 million loss for districts.

They also said having districts depend on the one-time federal funding while also pausing increases to the ECS, which includes Alliance Grant funds, will restrict “the ability to address these needs and funnels one-time federal monies away from their intended use.”

But Lamont’s spokesperson said the governor believes funding from Congress that would go to municipalities could help with any additional needs school districts may continue to have.

“The governor remains optimistic that Congress will provide the estimated $1.6 billion to Connecticut’s local municipalities, which will support our towns and cities in revenue replacement, COVID response and supporting additional resources needed for our schools,” Reiss said. “The governor’s budget mitigates the need for broad-based tax increases, relying on federal aid and partial use of the state’s Budget Reserve Fund while the state’s economy and revenues continue to recover. As the budget process continues, the administration will continue to engage with local stakeholders, those who work with students, and the General Assembly on a sustainable path forward.”